Samsung recently launched its Galaxy A9 smartphone in Malaysia. The most important thing about the phone is that it is the world’s first phone with 4 rear cameras. Snapdragon 660 processor running 2.2 GHz at the phone for the performance has been given. The phone comes with 6 GB of RAM and 128 GB internal storage.

There are reports that the company is preparing to launch it soon in India. Though the company has not yet given any official information about this, but the reasons for this are being discussed on the official website of Samsung India.

According to media reports, the company will launch this phone at a price of less than Rs 40,000. Through this, the company intends to compete with the number one company Oneplus‘s latest device OnePlus 6T in premium segment. Let’s say, four rear cameras have been provided in the Samsung Galaxy A9. They come in 24 + 5 + 8 + 10 megapixel sensors. The phone has a 24-megapixel camera for selfie. The phone has a 6.3-inch Full HD + Super AMOLED Infinity display.

The phone works on Android 8.0 Oreo. Snapdragon 660 processor running 2.2 GHz at the phone for the performance has been given. The phone comes with 6 GB of RAM and 128 GB internal storage. Internal memory can be extended to 512 GB with the help of an SD card. The phone has a 3800 mAh battery. It resists fast charging. Talking about connectivity, basic features such as 4G, VoLTE, 3G, WiFi, Bluetooth and GPS have been given in the phone.

Samsung Introduced the Foldable Smartphone, 7.3-Inch Main Display, Which Can Be Folded To 4.6 Inches Samsung Introduced the Foldable Smartphone, 7.3-Inch Main Display, Which Can Be Folded To 4.6 Inches Indian scientist built a robot in Samsung, named Neon; It talks in Hindi-English 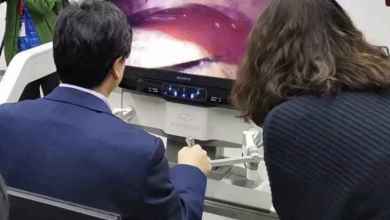 First time, a surgeon done a pig’s remote surgery with the help of 5G in china